We’re skipping tennis tales from the final Saturday of the French. We all know what happened. I jinxed Sam, I know I did. I know C-Note took the blame, but I have to be honest – it was me. I was in the same city, and I must have messed up the vibes or something. I don’t want to start enumerating my sins like C-Note did, but I know, I know. The only good news is, at least now Australia is slightly aware that we have a tennis star who is wreaking havoc throughout the globe. And at least now when Sam starts smashing up the US hardcourt season, people will take notice. And with Jarmila Groth and Anastasia Rodionova now both firmly back in the top 100, our country can take off with its tennis supporting again. I mean, we got a tennis related topic on the 7pm project, for heavens sake. If that’s not called making it, what is?

It’s time to hear about Part Deux – An Australian Girl in Paris. I had seen Roland Garros, and I knew of its beauty and glory. I had experienced the heady thrill of walking down the tree-lined streets of the Bois de Bolougne and examined the back entrances into the Roland Garros player area accordingly. I had scoped out the toilets, the Haagen Daaz stalls and the beer prices, and I was pleased.

So when two former college tennis players at my hostel expressed a desire in attending the French Open final with me, it became a bit of a party. Tennis bags packed, we were up bright and early on Sunday morning, only to be greeted by a downpour that stilled my heart as it erased my plans of tennis tans, picnics in the sunshine, and of course, dry conditions easing Rafa’s path to world domination.

I need not have worried. Twenty minutes after the downpour, my American mates and I were riding the metro like pros. On arrival, it was time for me to employ my favourite game, most recently used against Thai spruikers on the streets of Chaweng Beach.

Ticket Scalper: “Chercher place pour la tennis?”
Me: “Oui”
Ticket Scalper: “how many you want?”
Me (still walking): None
Ticket Scalper, continuing to follow me, “I have three, for you, three hundred euros..” but they can’t hear the end, because I’ve kept walking. They’re glued to their territory, and stare wistfully as I continue marching to the entranc.e

This time, however, I had to backtrack when I learned that even groundpasses sell out at Roland Garros. That’s right, those twenty dollar pieces of joy that we print off Ticketek at the last minute in Melbourne? Cos an arm and a leg at RG, and aren’t available even on the last day, when the only attraction was a junior boys final, wheelchair final, and the legends doubles.

Well, once I was in, I understood what the fuss was about. The legends doubles, let me explain, featured none other than the fabulous Goran. GORAN!

Utilising my limited but still fabulously accented French, I let the lady at the top of the stairs at Phillipe Chatrier know that I was “seule”. Margaret Court Arena style, she seated me and enabled me to catch the last few games of Goran, Michel Stitch, Andrei Medvedev and Yvengny Kafelnikov finish their legends doubles final.

It is a truth universally acknowledged among the Court Thirteen girls that Legends matches are grossly underrated by grand slam attendees. They provide all the best parts of tennis, without the nail biting anxiety: You get showmanship in shots as the old boys try to prove they’ve still got it, using spin to take the pain off the ‘oul knees. There’s hilarity in commentary, as old rivalries and friendships are made fun of in plain view of an audience after years of locker room suppression. There’s the celebrity factor, as living legends play the game the way we watch it as kids. And of course, the joy of live tennis – NEVER to be underestimated. 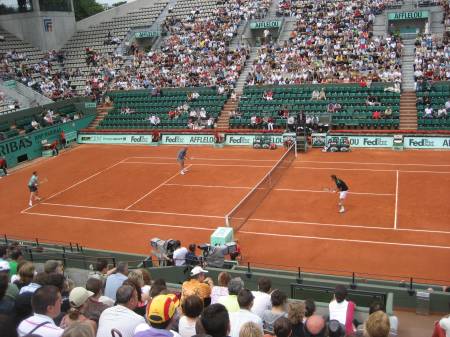 This time, we also had a bonus: Ovary Alert. Andrei Medvedev’s three year old son wields a mean racket. Check out the pics.

This entry was posted on Wednesday, June 9th, 2010 at 1:05 am and is filed under Uncategorized. You can follow any responses to this entry through the RSS 2.0 feed. You can leave a response, or trackback from your own site.

One Response to An Australian Girl in Paris – Part Deux