What is it with me?

Day 1 at the Open was a sweltering concoction of ups and downs, highs and lows, as sweltering nailbiters for my faves contrasted with pretty sunny whitewashes, and joyous moments of tennis awesome were interspersed with frustrating knucklegrinding ridiculousness.

I started the day in the stratosphere, as I was privileged to join a host of other USTA volunteers in our bright – and I mean bright, as in CANARY – yellow shirts to greet the first attendees with their free US open pens, including – wait for it! – a pullout calendar – AND – a sweepstakes (which I can’t pronounce, because in Aussie we don’t use that word.) I KNOW, right?

So as I was jumping up and down in my big bird outfit, shouting to everyone who came how welcome they were and pissing off actual official US open employees who were unimpressed with my Pied Piper-like shepherding of ‘their’ guests, the sun started to blaze, the boys and girls started to play, and the umpires all came out in a force of navy blue, making my heart swell with love. I even gave Lynne a pen. She walked past and I said, “would you like a free US Open pen?” I then noticed it was her, and said, “hi, Lynn.” She said, “Who is this crazy lady who waves at Carlos and Enric and knows my name? She probably has atdhe bookmarked… oh well.” Wait, I made that up.

After my pens were dutifully distributed, it was time for match watching, and being the Aussie Aussie lady that I am, I had to head to Sophie Ferguson – by way of the Monfils-Kendrick blockbuster, which defied the laws of epic first round five setters by REFUSING to be an upset. For some reason, this trend continued throughout the day, as Soderling, Monfils, and – yes, I’ll get to it – Melzer struggled through the pentateuch but still made it through. Soph was basically at matchpoint and unfortunately lost the match, which made me sad. Jelena could have used that wildcard too. But hey, you live and learn, and it was an important lesson for her. I’m looking forward to seeing lots more from this girl.

Day One at slams are always known to be awesomeness overloads, and yesterday was no exception. Deciding between good old toilet-paper face Juan Carlos Ferrero, second-favourite cheer squad mobiliser Gonzo (we love Chi Chi Chi, but Marcos’ Hellas are the best), and all our Aussie girls made things a wee bit difficult. After Sally Peers doing a lovely on Wozniak (see previous post), I had to make sure I gave Anastasia Rodionova my support.

Issue: She was playing the noisiest lady I have ever heard – and this comes from a Vika fan. Bojana, seriously, what are you ON? It was insanely hot out there, and Rodi was battling it out as she does while still looking impossibly gorgeous. I was inches away from Australian Open tournament director Craig Tiley and itching to have a chat with him, if only to say, damn I love your tournament. Which I did. We are now besties, and he is hiring me to co-run the AO with him.

Oh wait, that was the dream sequence. We had a lovely chat during MP. Rodi won, and tweeted me after to thank me for the support. Unlike another thankless recipient of my support – DIMA.

The history of our relationship with Dima will take more than one blog post to fill. I will, however, state that it is part of the origins of the name Court Thirteen, in a story involving fresh liquorice, some friendly New Caledonians, a lot of Russian songs, and an Italian qualifier by the name of Cipolla. Spending the afternoon racing between all my Aussies – from Anastasia, to Carsten, to of course the invincible Sam – while Dima was on stage – sorry, on court, made for a challenge.

It was so hot out there. Not only was it hot as an Australian January day, it was blazing with sunshine and not a lick of shade. Dimitry was playing and getting a wee bit snappy. Though he refuted it via Twitter later, but hey, I like my creative tennis stories. He wasn’t happy, trailing two sets and all.

I moved to the other side to sit with some Dima fans, where my calls of ‘Come On’ wouldn’t seem quite so conspicuous. Ha! I’m a girl in canary yellow, shouting on an outside court at the Australian Open. But what did i know. I davayed the man, and he came around. Instead of losing the third set quicky, so I could go see Sam and peace be on earth, he decides toturn things around and win it. Now I am stuck spending the afternoon getting an aerobic bikram yoga session running between Court 4 and Louis Armstrong, as my conscious struggles over whether Dima NEEDS me vs whether Sam has enough fans of her own.

No one wins out, btw. I get Sam through her tiebreak and race back to find Dima’s taken the fourth set. Sadly, though, he fails to finish it off in the fifth, but lucky Sam has done the job even without me there doing the screaming.

It’s time for Lleyton, and as expected, my favourites are not going to win in five setters today. Lleyton and Dima both go down, though not for lack of trying – or my cheerleading good vibe-sending.

Day Highlight: Jumping around in my canary yellow tee; watching Dima turn around the 3rd set, hanging out with the gorgeous Linz, Lleyton’s come back from 2 sets down to 2 apiece, sitting in sunshine watching Peers kick butt, reconnecting with the fabulous Enric Molina who I met in Melbourne and is doing his cool, calm and collected thing on the outer courts and main stadiums this week, and finding the random Aussies hidden around the place. Oh, and did I neglect to mention seeing Feli in the flesh? FELI. in the FLESH. girls, he is not a man. NOT A MAN, I TELL YOU. what?

Day Lowlights: That awful long subway ride, getting a dehydration headache, Dima losing, Lleyton losing, everyone I like losing, Fed winning, long lines at the food court – wait, why am I complaining about inevitables? Obviously the food and the heat and the event has its things. We all do. Obviously other players win, our favourites lose. So be it. Let’s enjoy!

Or as Robin would say, enYoy!!

I’m delirious. This may not make sense.

Pics to come. Also, donations of cameras would be much appreciated.

So Sally Peers despatched Wozniak so quickly and prettily, it was over before I could blink, and there I was, hanging over the railings, proffering my ticket in hopes of getting a signature. Said, “Well done Sally! Good luck in the next round,” and she just continued quaking. Then the lovely men from Fox Sports at home came to interview her, and I stood behind them waving frantically and saying “hi Mum.” Oh no, that wasn’t me, it was the two Aussies who sat next to me the entire match and even led the Aussie Aussie Aussie. 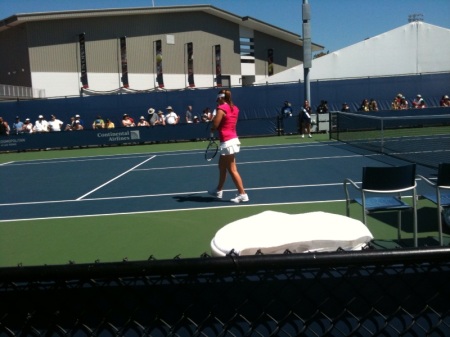 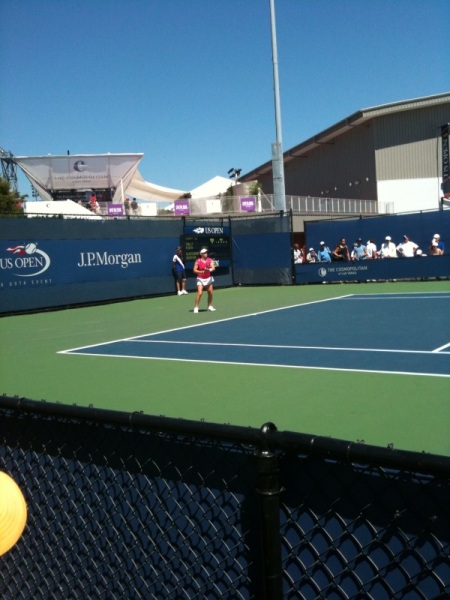 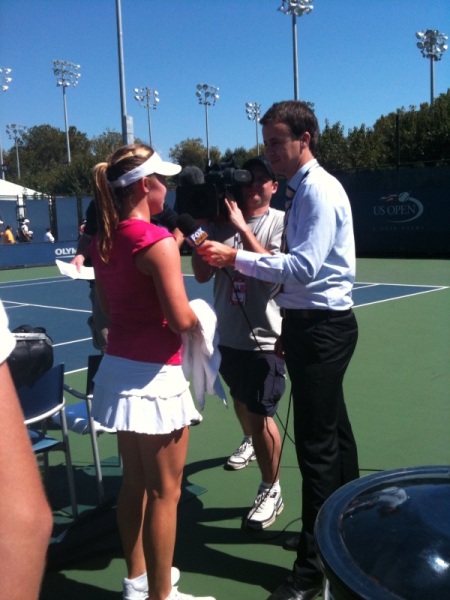 The news now is that when Sally plays Kim, she’s up against her childhood idol. And the lovely folk at Tennis Australia put up this adorable pic to show us how it happened back in the day.