How To: Behave in the Player Box

Over the last two weeks, R and LP’s tennis adventures have included a considerable amount of time perusing the player boxes of Melbourne Park. We’ve parked ourselves in the miniscule 3-seat-wide, 3-row-high strip separating the two on Margaret Court Arena; surreptitiously crept up to the rows behind Team Djokovic on Hiisense; craftily selected back row seats in RLA based on the views of Tio Toni and Team in their box; and even found ourselves sandwiched between coaches, trainers and significant others completely by chance on far-off outer courts and Show Courts 2 and 3.

Combine this with a significant amount of television watching during the year, and we’ve got the player box behaviour down pat. Leah summarised it quite well for me the other day, and made sure to perform appropriately during the Legends Doubles match on Rod Laver the other night. Making a beeline to where we were certain Ana had sat, contemplating stealing the skanky towels and selling them to some scary Ana fan (even though they more likely belonged to a sweaty Serbian team member rather than the lady herself), the lovely LP sat herself down and showed us how it’s done. 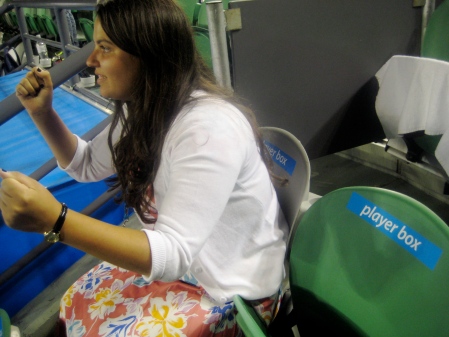 Fist pump after exceptional points… Or, you know, give signals that LOOK like fist pumps but indicate…

And, you know, sit around and look pretty.

Note: That was Ana’s chair.

This entry was posted on Sunday, January 30th, 2011 at 5:58 pm and is filed under Uncategorized. You can follow any responses to this entry through the RSS 2.0 feed. You can leave a response, or trackback from your own site.

2 Responses to How To: Behave in the Player Box