For those of you who have been following this blog of mine since its inception, you would be well aware that today is not just any day – not just the first day of the Australian Open or the Golden Globes or the freezingest day New York has had all year or the day Fernando Verdasco decided to single-handedly blind the entire tennis watching population: 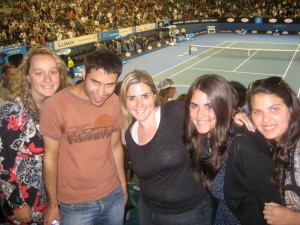 No, it’s also the day when two years ago, I decided to start this little blog of mine.

Back then it was ours, actually, a joint project of my lovely tennis-watching partners in crime and dear sisters, M (resident photographer) and L, resident stalkerazzi who always knows when to find the match or practice court that’s heating up at the time. Then I started talking tennis to all the Twitties (R.I.P, Dinara Safina – the R is for retire, obvs) and suddenly writing about tennis was one of the funnest things I could spend the wee hours of the morning doing, coming only a close second to watching grainy streams on illegal Romanian websites.

Then some interesting things happened after my Fabulous Tour of the Universe TM, and I relocated to another pretty city, though not as pretty as my home where courts sparkle blue, Melbourne. This city also has a Grand Slam to its name, and so I learned that aside from sparklelicious Plexicushion and beer-toting banana loungers in the grass, there are other tennis tournaments out there, among them the biggest and sometimes nastiest of them all (I mean it with love) – the US Open. Blue replaced navy and all my golden experiences in Rod Laver were replaced by binocular-necessitating nosebleeding moments in Arthur Ashe. Relocating to New York, I had to cope with a whole new set of tennis time differences, the kid-in-a-candy-store array of tennis tournaments on the continental US to contemplate holidaying to each year, and most importantly, the concept that perhaps one day, come January, I wouldn’t be able to make it to the courts that sparkle blue.

So when last year the tennis gods had me home in Australia during the US Open, and now, back in the US during the Aussie Open, it’s all giggles and laughs and rainbows and – WHAT AM I TALKING ABOUT, BUCKETS OF TEARS, DUDE – as I discover the concept of watching a Slam from afar. And blogging it, when I can.

This entry was posted on Monday, January 16th, 2012 at 1:39 pm and is filed under Australian Open, Australian Tennis. You can follow any responses to this entry through the RSS 2.0 feed. You can leave a response, or trackback from your own site.