According to the latest news from Tennis Australia, the Aussie team is all sorted for Fed Cup this weekend. I’m taking that to mean that all the girls now have a way of making it over to Kharkov – despite the fact that Stubbsy had a mild panic attack on Anastasia’s Facebook page the other day.

The dramas of making it tennis tournaments this upcoming week have been nicely covered on Twitter for those of us who feel that life outside a closed down airport just isn’t half the fun. It’s been relatively easy for the boys, who were in the neighbourhood anyway to make it a road or train trip and trundle through the the gorgeous scenery to reach Barca.

Not the same for the ladies, who will have to be anywhere and everywhere over the weekend for the Fed Cup. Vika’s whinge through her car service ride have made the annals of Twitter gold, and also reaffirmed the most important thing: The girl has an iPhone AND a Blackberry. Another piece of random news that we so love over here at Court 13.

So with A-Rad on her way, we just  need to make sure Sammy can pack that big silver cup in her wheelie and turn up to lead the team to victory. With Stubbsy and Alicia making up the rest of the team, all signs point toward what could be a happy shiny time for followers of Aussie tennis. 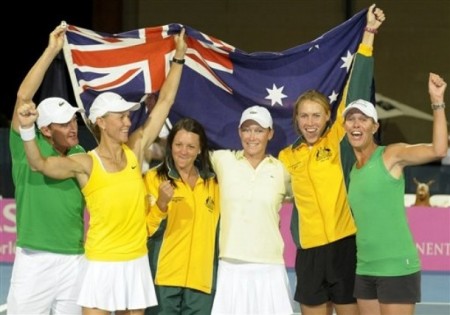 It finally looks like we have a team that can pull themselves together and get us the win. If Sammy isn’t too tired from the marathon she’s been running over the last week, she should be full of confidence to take on the Ukrainians and get the Aussies a shot back into the World Group team. After also being the first Aussie with 2 WTA titles in quite a few years (I believe Jelena Dokic would have been the last one), she’s made us so happy that it only seems fair that she takes it down the logical route and gets us back on the map, tennis-wise. 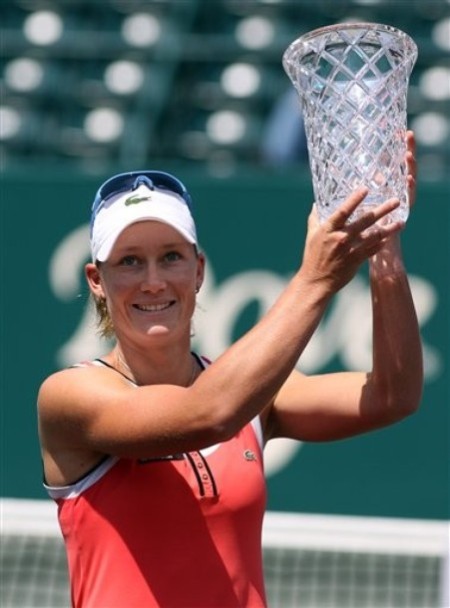 My lovely neighbour, Anastasia, who I still haven’t managed to meet down at the shops but will one day, will also be making her Fed Cup debut.

Alicia has made a steady if not spectacular comeback. Our favourite spokesmodel is back in the Top Hundy and even if there’s no Garnier face cream left, she looks pretty damn fantastic, as you do when your name is Alicia Molik.

And with Stubbsy and Sammy, together again as they belong, can anything stop us?

Oops – I neglected to mention the most important team member. With this guy on board, the Bondage Sisters should be sent packing in no time at all.

(Not Casey. She’s not coming this time, Mum said).

Nole: It Must Be Love

Those of you who have been with me from the start may recall that my sisters, M & LP, are my premier tennis partners and in fact the original tennis fans of this family. They may not contribute to this blog physically, but they are influential in the tennis outcomes of this family, and the Nole Love is no exception.

LP will tell you the story of Nole hugging her but that is for a different day and time. This is about Kooyong, and a Day in the Life of Stalking Nole.

First of all, all Non-Nole Pics have been condensed into here

It started at his match, where we lined up to watch him walk in with Tommy. I was desperate for Tommy’s attention – LP was all over Nole. 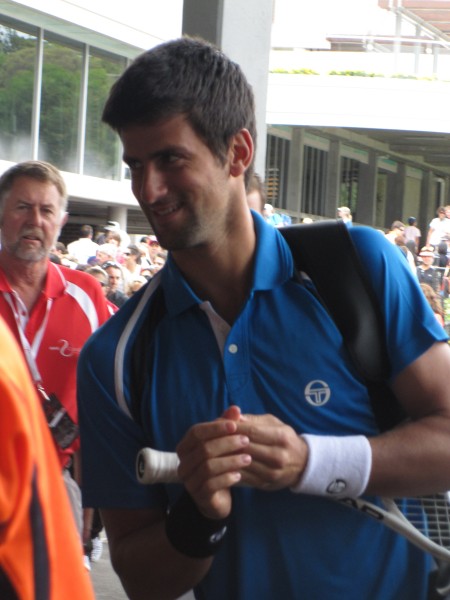 He played Tommy, and then the stalkerage attempts began.

Signing her tennis ball did not suffice. LP was on a mission, and she found the perfect partner to join her. 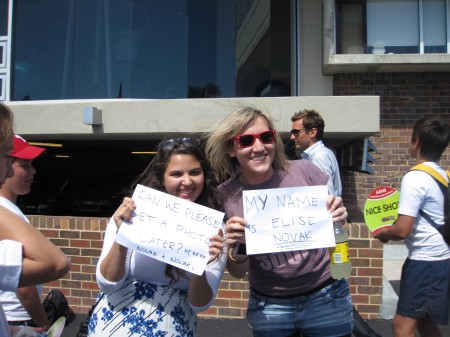 After following Nole back to the clubhouse, he was discovered to be pumping those muscles in the gym upstairs. Note the one way glass up on the first floor? He was there all right, because a crowd soon gathered and the Djoker had a grand old time waving at his fans in a queenly fashion. (This was the grass of Kooyong of course, it totally fit.) Most people gave up after a few minutes (I did after a few seconds – Fernando was on court, I have my priorities) but LP and Miss Novak persevered. They even made the lovely signs you see above.

So it didn’t take long for the below video to happen. Yes, we are the girls yelling. And our accents are Aussie. And Nole, totally, loved us.

For more Nole pics, try this